Solar as a key player in the fight against biodiversity loss

Better Energy has designed a solar park that demonstrates the role solar energy can play in the long-term development of biodiversity. A new biodiversity protocol documents significant development.

Solar parks designed in the context of the local area can improve soil quality, heighten the biological diversity of the solar park site and generate renewable energy. The new Biological Diversity Protocol (BD Protocol) by the Biodiversity Disclosure Project (BDP) documents the positive impact we have when we build solar parks to make the most out of the land used.

Together with biodiversity experts from Habitats, we have designed environmental points of impact in several of our solar parks. Our collaboration with Habitats is born out of the idea to leverage solar parks for restoration and regeneration. A new analysis by Habitats based on the methodology in the new protocol finds that our biodiversity initiatives in Blangslev, Denmark have contributed significantly to the biodiversity in the area. Based on these findings, Habitats estimates that the share of biodiversity increases from point zero before the construction of the solar park to about 20% after construction, approximately 25% after five years and at best up to 60% over 30 years. The larger the area we manage, the greater the impact we can make. 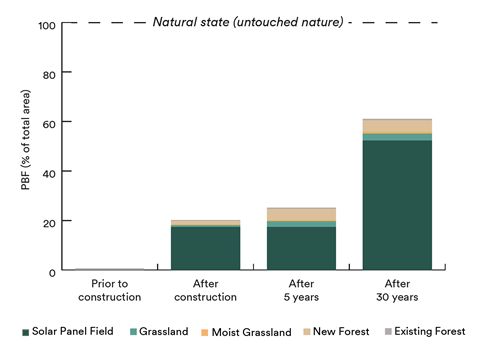 All of this is good news. We now have both well-founded evidence that our solar park in Blangslev makes a great contribution to biodiversity in the area, and we also have a scalable model for working with CO2 reductions and biodiversity protection:

“Our solar project in Blangslev is a pilot project that demonstrates how solar park sites can create improved conditions for wildlife and ecosystems. Now we have the evidence to scale up our solution for other solar projects. Solar parks are the only renewable energy technology with a positive environmental footprint. A solar park greens the grid and is free from human disturbance in its lifetime, which allows the soil to rest and plant and wildlife to emerge. It is a proven win-win situation,” explains Better Energy CEO Rasmus Lildholdt Kjær.

The new protocol is an accounting and reporting framework that enables companies and organisations to record changes in biodiversity systemically and consolidate new biodiversity impact data. Habitats CEO Rasmus Vincentz explains that the potential for scalability lies in the systematic overview and ability to make projections for future development:

“It is essential to find a way to measure and quantify the impact we make when we work systematically to restore and preserve nature, increase biodiversity and support healthy ecosystems on solar park sites. Together with Better Energy, we are recording changes in biodiversity and continue to heighten the natural value of Better Energy’s solar park in Blangslev and in future solar parks. The Biological Diversity Protocol is a great tool to quantify improvements of nature quality and biodiversity in our projects, as well as communicate these improvements.”